Who does not recognize the universal humor of the world famous artist Guillermo Mordillo?

His big-nosed chubby characters come in an incredible number of bright designs in vivid colors, appealing to both men and women, and in a variety of universal themes such as sports, love and animals.

Mordillo – a name, a trademark, a promise of good spirits and a guarantee of quality. The brilliant career of Argentinean Guillermo Mordillo, who was born in 1932 in Buenos Aires from Spanish immigrants, is the result not just of creative flair and luck but also of will power and perseverance. It is the result of constant daily commitment and not merely of improvised bizarre ideas.

Guillermito was still a boy when he began earning a living from drawing and that typically adolescent enthusiasm with which he approaches his work, the work of a lifetime, has never quite disappeared. This enthusiasm also involves a constant desire to change, to try his hand at new possibilities and to create a new personal image. It is also why even today, after a fifty-year long career, Mordillo still keeps changing the houses he lives in, the countries he travels to and the languages in which he expresses himself. (but his drawings remain perpetually and decidedly silent, understandable all over in the same manner and entrusted only to the universal language of images). Over the years Mordillo has lived and worked in Peru, in the United States, in France and in Spain. He has illustrated fairytale books for children, designed advertising campaigns, created cartoons, designed greeting cards and sketched humorous pictures.

Already in the early ’70s, he started to gain a name for himself throughout the world as the creator of chubby men and round women, the only black and white elements in a very colourful environment that is strictly without words. From the outset his humour has always been marked by contrasts and opposites – austere black and white stands out against brilliant colours and a remarkable emptiness is juxtaposed against incredibly crowded places. The most light-hearted laughing fits contrast with agonised ponderings on the great questions of life. Probably one of the main reasons behind the immense international success that Mordillo’s work attracts lies in this, and is true for both children and adults: his wonderful cartoons are always open to being read on two levels – they make you laugh and think.

And it is very true that the very nature of wordless cartoons enables him to instantly touch only the essential. Whether in Germany or in Japan, Mordillo’s visual creations are understood and appreciated just as they are in Italy and in South America. His natural or artificial spaces have no special geographical or national features: they could be anywhere. 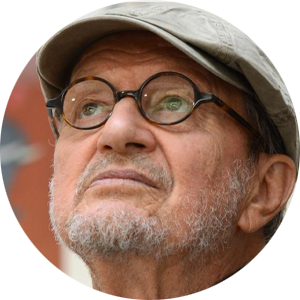